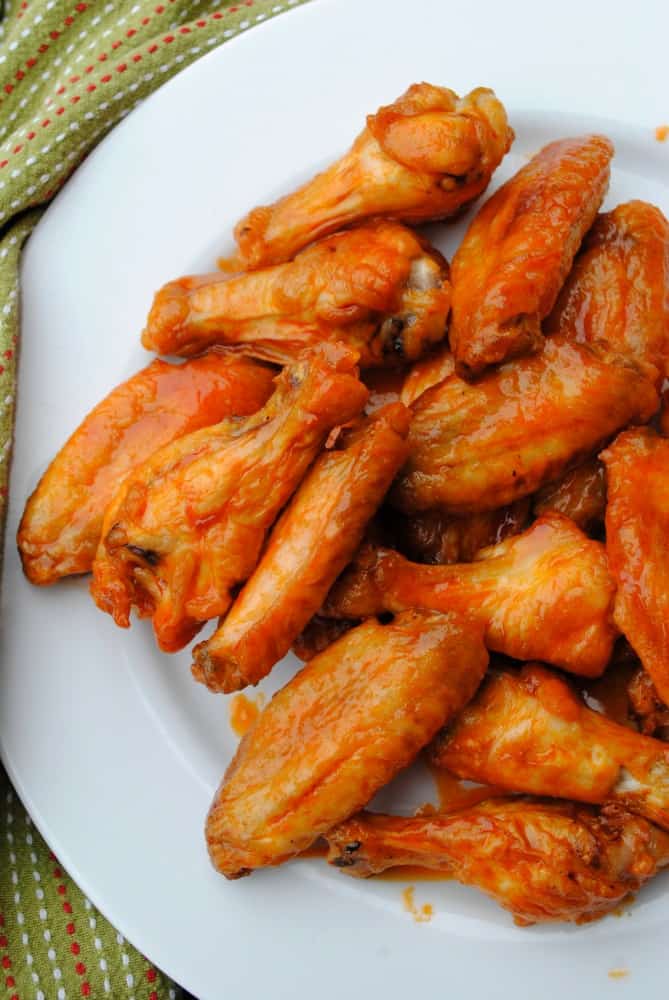 Friday nights in our house used to be dedicated to pizza night until my daughter was diagnosed with a wheat and dairy allergy last year.  We weren't going to let our Friday fun food night be ruined, so we switched it to one of our absolutely favorite "fun foods", baked buffalo wings.  My mouth is watering as I type this because they are just that good.

My husband and I have been involved in youth ministry for thirteen years, and I have served many a hot wing to teenagers over the years.  I started out frying them in vegetable oil, which I do not recommend now.  While you will indeed get a crispy crust, I do not recommend anyone ever consume vegetable oil if you can help it.  Plus, frying wings makes a gigantic mess, you have to do something with the oil afterward, and you have to stand over and babysit the wings the entire time.  Baked buffalo wings are so much easier, don't make nearly the amount of mess, and there's no babysitting required.  I still get rave reviews when I serve my wings, and I can attest that no one has complained since I switched over to baking. 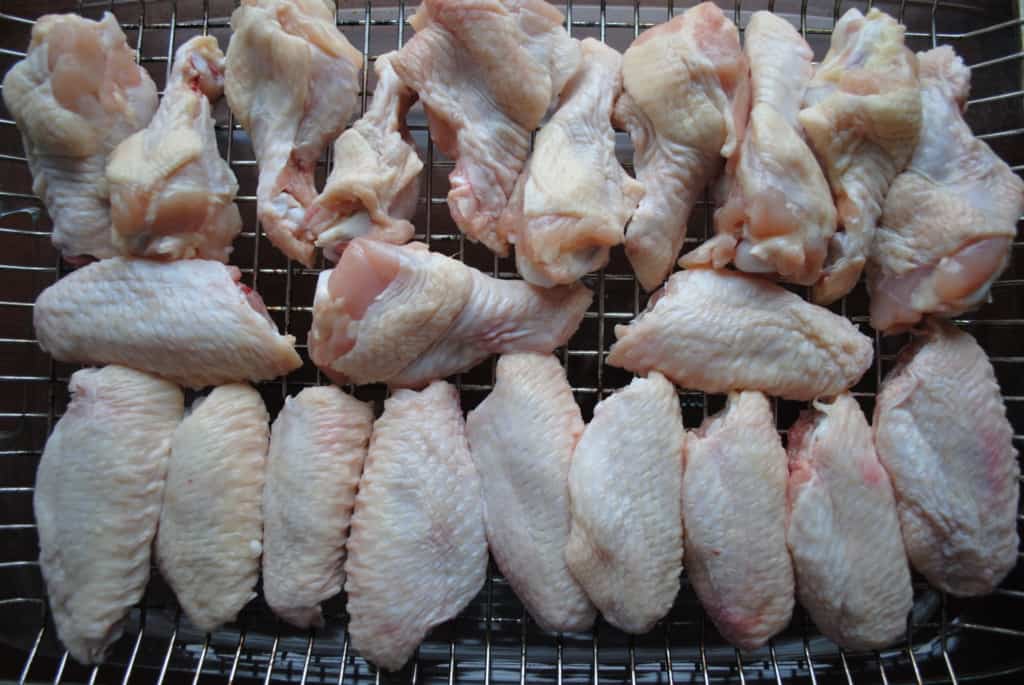 The secret is putting them on a rack on top of another rimmed baking dish to prevent sticking on a pan and so that they aren't sitting in their own juices steaming.  If you do not have a rack, do not despair.  It will still work on a rimmed baking sheet, but I would recommend using parchment paper so the wings don't stick to your pan, which will cause you to lose your crispy skin and make you cry. No one should be crying over wings.  Well there was that one time that I had an incident with hot sauce in the eye, but that's another story altogether.  The second secret is cooking them at a temp in which they will crisp and flipping them over to crisp the second side.  They need to cook at a temp of at least 400 to get that golden color. 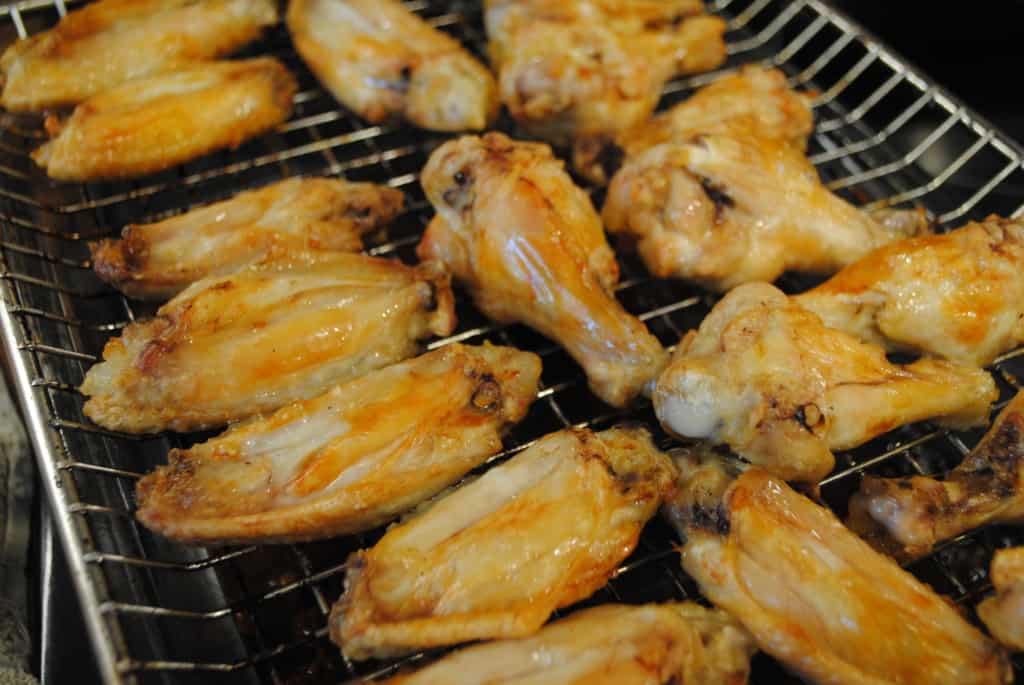 The third secret is the sauce.  Please don't get all fancy and try to reinvent your buffalo sauce with all kinds of crazy ingredients.  You simply need hot sauce (I love Franks) and butter (ghee if you want them to be Whole 30 approved). Don't buy a pre-made sauce because it will be full of junk that your body won't love and it won't taste as good anyway.  Stick to the basics and you won't go wrong.  If my ratio of hot sauce and butter is too spicy for you, just add a little more butter to mellow it out. 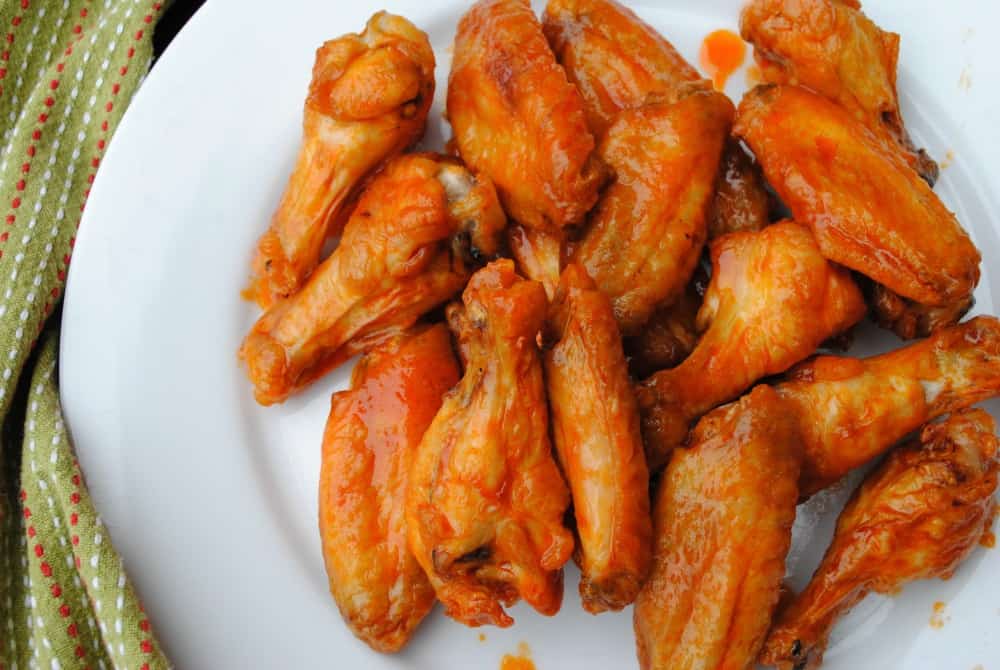 Now go make these wings and have a party in your mouth!